This is arguably my most ridiculous recipe.

There's a reason though. You'll see.

Up front, I think we all agree we need an ingredients list. You'll notice that unlike a traditional Beef Wellington, this is going to be absurdly cheap. If I kept track of food like I do of beer, I imagine my use of cheap cuts of meat and monk-like patience has probably paid off my Sous-Vide cooker as opposed to buying filets. If you compare it to how often I eat out anymore (when home in Virginia, I go out to eat approximately on the fifth of every Never), I'm actually sure it's all paid off.

While many of these things are already probably in your kitchen, let's do a quick price comparison...

Given that the prosciutto and puff pastry are the same, and the mushrooms are approximately the same, I've added a few ingredients - a shot of spiced rum ($0.28 per finished Wellington based on current prices at BevMo), some extra butter, garlic, onion, some smoked paprika and ground mustard, but less olive oil and no actual mustard, so that's about a wash. The amount of used avocado oil, divided out by the number of finished Wellington's is a whole $0.10. Everything else is even less.

Where the big money changes are?

And the steak? $2.25 for the short rib on average. $12.49 for the same size of good filet mignon. That's PER SERVING of Wellington.

BALLER ON A BUDGET.

Here's how it goes. Four days before you want to eat (plus a few extra hours), there's a process.

Oh, if you don't like reading, quit following my blog. I don't skimp on words. I sear the boneless short ribs (not flanken style) for a few seconds a side on an ultra-high heat source. I use a non-stick pan atop an induction heat source on maximum heat.

Before applying them to the pan, I do a quick wet rub. It starts with a few squirts of avocado oil, then about a teaspoon each of the freshly ground sea salt, mustard powder and the paprika.

Rub this down on each side of the short rib, then sear.

The trick to avoid cooking the interior of the meat at all is to do one side at a time. Understanding the meat is approximately a cube or a rectangular cube, it's got six basic sides. If you imagined each piece of meat has a "top," "bottom," "left," "right," "front," and "back," I take all the pieces and sear all their bottoms first, one at a time, removing from heat when done, then go back to the first hunk, do all their tops, then repeat for each side. The end result is that while the entire outside of the pieces of meat should have a good carmelized char where the Maillard Reaction occurs, but the interior of the meat should still be raw.

Because short ribs have a lot of connective tissue, the collagen will not be broken down at all. If you tried to eat the ribs at this point, they'd border on disgusting. But that's okay. We have magic planned. 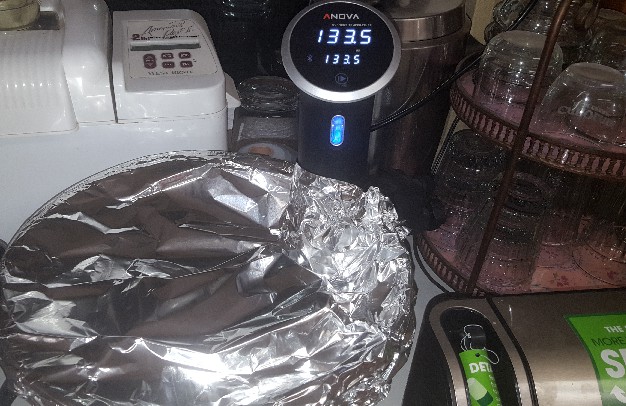 Vacuum seal the ribs. I add a few sprigs of rosemary and some fresh basil (I grow both in my kitchen), but this is just me being pretentious.

Double seal them in case of leaks. I actually have an issue with the heating element on my FoodSaver, so I seal both ends of the inner bag twice, then I put that into another bag and seal it (only once on the outer bag). Since doing this, I have never had a bag compromised.

First, you need to make the duxelles. A traditional duxelles can be done one of two ways: creamy, as I've seen done for Wellington a few times, and dry, which is what I start with. When I'm done, it's nothing like it though. 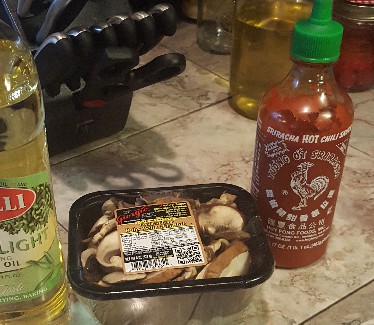 Dice the mushrooms until all pieces are less than 1/2" x 1/2" x 1/2" cubes at the absolute largest and set aside. In a saucepan, add 2 tbsp of unsalted sweet-cream butter and get it up to medium heat until it begins to foam. Add the mushrooms, slowly, stirring constantly. Reduce heat to low, and cook, stirring until dry. This may take up to ten minutes as you wick out the moisture from the mushrooms. Then turn the heat to high for another five minutes, until they begin to wilt.

Remove from pan and put them first on a paper towel to dry. When cool, put them in a clean lightweight dish towel. I use the type that are almost as thin as cheese cloth. Twist up small batches of the mushrooms until the moisture appears to be coming out of them all together. Set aside and prepare for the food processor.

Into the food processor, and pulse them until nearly as fine as hummus.

Second, we have to make my very favorite thing, which you'll read about in many recipes here on tastynoms and that is a garlicky, buttery, sweet-onion and rum mixture. Dice up a lot of red onion - at least 1/2 cup when done. For a really large red onion, this may only be half of the onion, but may be a whole smaller onion. At least eight cloves of garlic need to be peeled and stemmed, and then bruised first, rested for a minute or two, then diced ultra-fine.

Four tablespoons of butter into a clean pan on medium-high heat. When melted and beginning to bubble, add the garlic then the onions. Continue to sauté until the onions begin to carmelize. At this point, crank the heat up to maximum, add in the rum, and flambé. 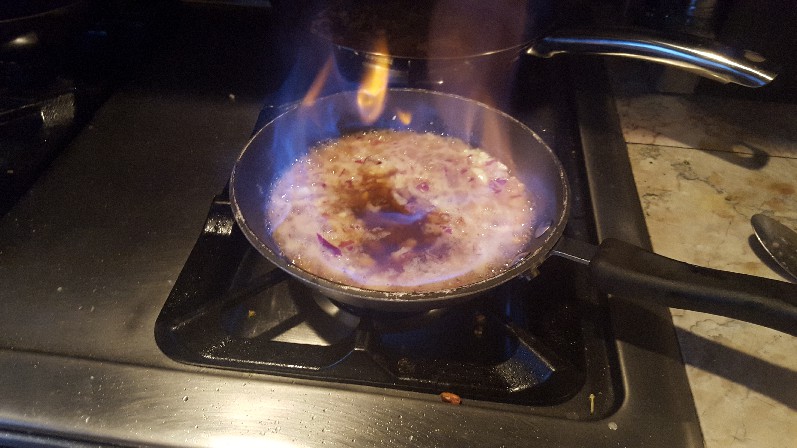 Stir occasionally with a fire-resistant spatula until the fire dissipates and then immediately reduce to low-simmer heat. Keep it at this temperature until evaporation results in a thick paste-like substance. When that occurs, leave it in the pan, un-covered, but remove from heat.

Now, we're going to kick up the duxelles a few notches. Back into a pan, with just a tiny amount of extra virgin olive oil - if even necessary - in order to facilitate the duxelles to just not stick to the pan. And then, when warm... Add a pretty liberal amount of sriracha. Sauté at medium temperature until the sriracha is fully cooked, then remove from heat again and set aside.

It's now been 72 hours. Remove the short ribs and let them rest. Pat them dry.

Now, it's crepe time. For the longest time, I made this with fillo dough for the first layer which was awesome; it made for a fairly effective moisture barrier, and it was relatively flavor-less. But I learned the Gordon Ramsay variation of the Beef Wellington used a crepé and I'm sold on this theory.

In a large skillet, melt 2-3 tbsp of butter on medium heat. Add 1/4 cup of the batter, and make a crepé. It should be between 45 seconds to 60 seconds a side. When both sides are done, set aside and repeat until at least four perfect crepés are finished.

On a large flat area in your kitchen, lay out a long strip of plastic wrap. Put the crepé down on it, and then add the sriracha duxelle across about half of it and the onion/garlic/rum/butter on the other half. Then lay out a strip of prosciutto, and finally, put a short rib on top. Roll the crepé around the short rib, and trim off excess. Bind it tight with the plastic wrap and throw it in the fridge.

When all four are done, take fresh, new plastic wrap and lay out and then lay out the puff pastry that should still be "fridge" cool in temperature. Remove the wrapped short ribs from their plastic wrap in the fridge, and wrap them in puff pastry, tightly, and then trim the excess off, and seal them back in plastic wrap, and back into the fridge.

At this point, it will last at least a day. If you're a restaurant, this is a very cost-effective way to make things, where you can do the hard work ahead of time during prep; the final delivery is still a pain for the consumer because the "bake" still takes a while, but it's not too bad. Just do the next step below. I let mine totally rest over the course of a day. This is what pushes you from the 75 hour or so to the 100 hour mark by the time you serve them.

Combine two egg yolks, a splash (less than a tbsp) of milk and a tbsp of warmed butter into a bowl and whisk until smooth.

Pre-heat oven to 425° F. Remove wrapped up short ribs from the fridge, unwrap the plastic wrap, and place on a baking sheet with the seam down, and liberally splash with the egg/butter wash. You bake it for fifteen minutes, pull it out, paint it with more egg/butter wash, and return to oven for another 15 minutes.

While this is going on, there's a sauce to create. Stir ginger paste in with balsamic glaze until totally emulsified and put in a ziploc bag with the corner cut so you can artistically apply.

Remove the Wellington promptly at 30 minutes, and the puff pastry should be light and finished. Wait for 5-10 minutes and cut into medallions. Serve. 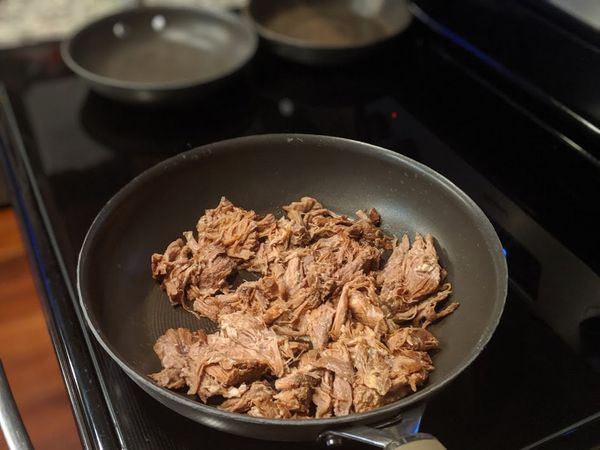 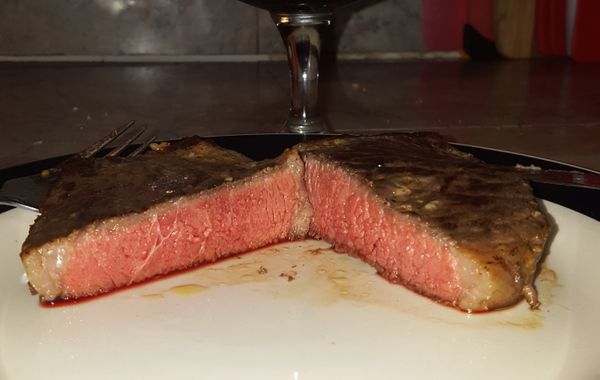 The most "over-used" toy in my arsenal used to be my beer brewing stuff. I have a Beer Bug from the now defunct ParasitX that worked great (though